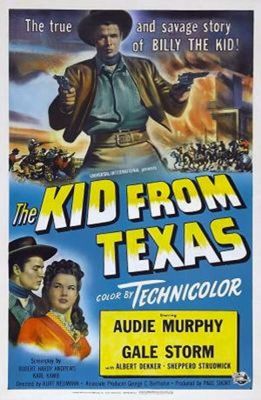 movie | usa
In New Mexico, Billy the Kid is involved in the Lincoln County War, kills many rivals and eventually becomes a wanted fugitive.

This was an early starring role for real-life war hero turned actor Audie Murphy (1925-1971). Studio publicity claimed The Kill from Texas set a new record for the number of deaths depicted onscreen:
In 1879 New Mexico, ranchers are warring with over property rights. Lawyer Alexander Kain and his business partner, Roger Jameson, are confronted in their office by armed men trying to serve an arrest warrant on behalf of their rival, Major Harper. Young William Bonney cornes to their aid, showing off his impressive marksmanship, and earns himself a job as a ranchhand, thanks to a grateful jameson. Though jameson knows Billv has had a violent past, starting with killing his own
stepfather for mistreating his mother, he gives the young man a fair chance, and is rewarded with Billy's loyalty. Showing his respect for Jameson, "the only man that ever treated me like I was good enough to shake hands with," Billy agrées to put his guns away until they are needed. Kain, who's more dubious about Billy, arrives at the ranch with his beautiful young bride Irene in tow. Both Billy and Irene clearly take note of each other, enjoying a pleasant chat under the moonlight. Kain remonstrates with his bride for being friendly with the help. The governor ot the New Mexico Territory calls on Kain and Harper to end their violent teud, and both men agree. When several of Harper's henchmen turn up at the Kain ranch, wanting revenge for being shot by Billy, Jameson tries to handle the situation with nonviolent means, and is promptly shot dead. Strapping on his gun belt once more, Billy vows to avenue his friend and mentors death, however long it takes...
Source: Gale Storm: A Biography and Career Record By David C. Tucker

(This view has filters. Remove filters)