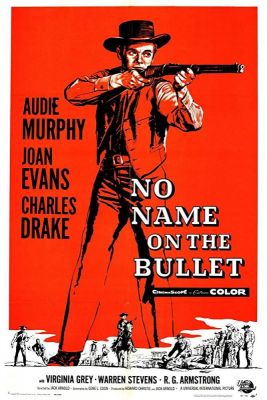 movie | usa
When hired killer John Gant rides into Lordsburg, the town's folk become paranoid as each leading citizen has enemies capable of using the services of a professional killer for personal revenge.

This film was the closest Murphy came to a classic western, and, like Walk the Proud Land, has been the subject of favorable reassessment by a number of film writers in recent years, mainly in relation to the other work of director Jack Arnold.
The plot centered around John Gant (Murphy), a feared hired assassin who executed his victims without mercy — but only after legally goading them into a fight. When Gant arrives in the town of Lordsburg, his very appearance is enough to cause panic among all those hiding a guilty secret, even though he refuses to divulge the name of his intended victim.
Only after the town has been torn apart by gunfights, lynch law and suicide does Gant reveal his intentions, but is thwarted in his task when the victim, a retired Judge (Edgar Stehli), dies from a heart attack while attempting to kill Gant.
The local physician (Charles Drake), who has befriended the gunman, smashes Gain's gun arm with a blacksmith's hammer, thus ending his career by making him an easy target for the inevitable challenger.
"A lot of men would like to kill John Gant," Audie says, painfully mounting his horse.
"But it look a healer with a hammer to make it easy for them."
For most of the film Murphy did little but sit and talk, but bis presence was fell in every scene. His performance was
without question the most mature and impressive of his entire career, and Jack Arnold deserves equal credit for making
full use of his star's personality, background and dramatic limitations in a role that embraced them completely within its own structure.
It is not too presumptuous to compare Murphy's lohn Gant with Alan Ladd's immortal Shane—in each case the actor
and the role were in total accord; and if Bullet missed out on the stature of Shane, it is mainly due to the familiarity of the
Universal backlot location, the inevitable surface gloss, and a degree of shallowness in the drawing of the minor characters by writer Gene L. Coon.
Source: The Films of Audie Murphy
By Bob Larkins, Boyd Magers

(This view has filters. Remove filters)
list show all 5 releases