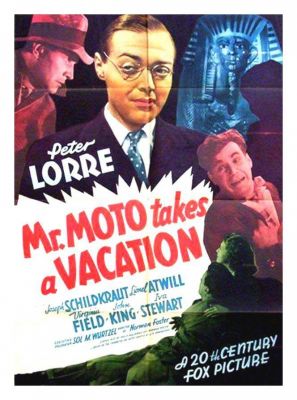 movie | usa
Disguised as an Austrian archaeologist, Moto helps unearth the priceless crown of the legendary Queen of Sheba and sans disguise defends it from a variety of thugs and criminals.

This, the last of the eight Mr. Moto films, is the sort of film that is entertaining if approached in the right mood. It's fast moving, full of exotic locations and has a distinct flavor of film noir about it; most scenes take place either at night or in the
rain and are full or characters in dripping, wet-soaked overcoats. The narrow streets of old Chinatown look good — they may have been recycled from another production.
Atwill is third-billed and gives an enthusiastic performance as Professor Hildebrand, the curator of a museum that houses the crown of the Queen of Sheba. Although not a major role, Hildebrand is a still a prominent character.
What is good about the part is that Atwill is given a wonderful opportunity to relinquish his sinister persona and showcase his talent for light comedy. Professor Hildebrand is an excitable, blustering character, all of whose security devices go
wrong at the worst moments. He is first discovered in his office perusing a selection of neckties and is
berated by Joseph Schildkraut for wasting time. "There's no harm in a man trying to look his best," offers Atwill. "It won't do any good in your case," suggests Schildkraut sarcastically.
Giving a grand speech to a large audience, the professor looks to his left and sees a uniformed security' guard yawning, prompting a classic double take from the abashed and wade-eyed Atwill. He is full of fluster and bluster as he
demonstrates the museum's security devices — only to find that none of them work. When an alarm finally docs go off, he flails about like a startled chicken, his monocle flying around on its chord.
At the climax, Peter Lorre and Joseph Schildkraut fight it out in the museum, knocking into various exhibits. "My antiquities! My mummies!" squeals the horrified Atwill.
"My goodness!" cries out another character.
Source: Lionel Atwill: The Exquisite Villain
By Neil Pettigrew