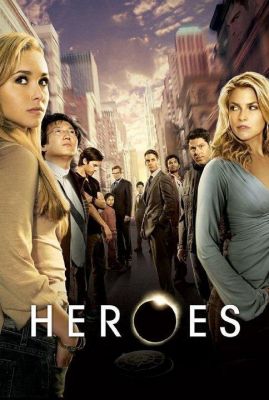 series | usa
Common people discover that they have super powers. Their lives intertwine as a devastating event must be prevented.

The program begins with these words: "In recent days a seemingly random group of individuals has emerged with what can only be described as 'special' abilities. Although unaware of it now, these individuals will not only save the world but also change it forever. Their transformation from ordinary to extraordinary will not occur overnight. Every story has a beginning. Volume one of their epic tale begins here [New York City])."
Mohinder Suresh is the indirect link to each of these special humans. He is a geneticist from India who is following in his father's footsteps (the study of mutations and the human potential). Unknown people killed his father just as he figured out how to identify and locate these mutants. As he begins his mission, the viewer learns that he must bring these
strangers together to save the world; it is also learned that sinister forces are out to locate these same people for reasons that are anything but good.
Peter Petrelli is a male nurse; his brother, Nathan, is a politician. They share an uncanny ability to fly.
Claire Bennett is a Texas high school cheerleader (at Union Wells High School) who can instantly heal
herself from any injury.
Hiro Nokamura is a Japanese office worker who has the ability to bend the space-time continuum (he is also a comic book fanatic who believes everything he reads in them). Nikki Sanders is a single mother (of a genius son named Micah) who earns a living over the Internet by stripping via a web cam (for $39 a customer). She is capable of incredible strength and brutality when she blacks out (she can also sec an image of her other self in a reflective surface).

Isaac Mendez is an artist who unconsciously paints pictures of future disasters — one of which is the destruction of the world. Eden McCain is a telepathic. Matt Parkman is an L.A.P.D. cop with the ability to read minds. Claude is an apparent homeless man who possesses the power of invisibility (although Ite has been using it (or stealing).
Once the mutants are united, Suresh wages a war of good vs. evil in an attempt to avert what Isaac had painted.
In mid-season the character of Nikki Sanders is written out when she has a confrontation with the man seeking the mutants powers — Sylar — and kills herself rather than give him her power; Claude replaces her.
Monica is introduced in the episode of October 15, 2007 ("The Kindness of Strangers") as a girl who derives her powers Iroinwhat she sees on television;
Ellen is also introduced as a girl who derives her power from electricity.
Source: Vincent Terrace - Encyclopedia of Television Shows - 1925 to 2007-McFarland (2008)