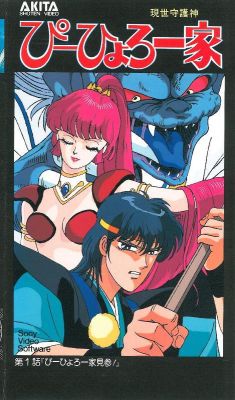 Kyota, Sabatta, Q-ta, and Kyonta are the guardian spirits of our age, protecting Earth from evil spirits while masquerading as humble students at the Seiwagi ("Holy Japanese Citadel") middle school. Suspecting supernatural involvement in the
suicide of female student Maiko, Kyota, and Kyonta investigate, only to discover that their school is built on a prehistoric
crematory, and the restless dead are haunting the students. Kaori Himeki's fantasy manga from Princess magazine was
originally going to be adapted into a video series, but its chances were destroyed when Akira was released barely a
week later. Fantasy anime fell out of favor, and this abortive first episode never got further than its theatrical double bill with the digest edition of Aim for the Ace 2. A few years later, the likes of Poltergeist Report made Clan of Pihyoro more appealing, but it was too late. Note director Satoshi Dezaki, working here with designer Sugino, who is normally associated with his brother, Osamu.
Source: The Anime Encyclopedia, 3rd Revised Edition: A Century of Japanese Animation
By Jonathan Clements, Helen McCarthy